How Much Caffeine is in a Cup of Coffee 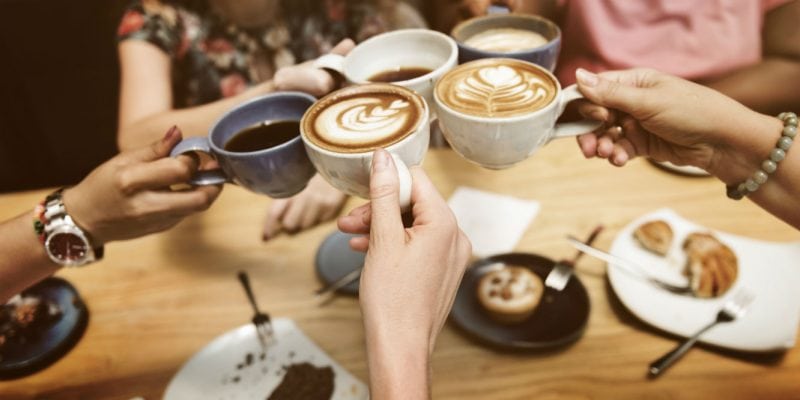 Have you ever questioned how much caffeine is in a cup of coffee? If you rely on the boost in energy that a cup of joe brings, then you have likely wondered the same thing.

This article will allow us to share with you everything you need to know about your favorite caffeine beverage. Where did it come from? How many nutrients are found in it? What’s on the list of benefits and dangers?

We are sure that you will have gained new-found confidence in your knowledge about coffee by the end of this article.  You will be able to brag about it to your friends the next time you meet up for—well, coffee.

About Coffee and Its Origins

For hundreds of years, coffee has been enjoyed by men and women. It is believed that coffee was originally from Ethiopia and only started being known across the globe in the 16th century.

Coffee has always been recognized as having an energizing effect. The beverage was commonly consumed by Islamic people as it plays a big role in some of their religious practices.

Up until today, there is still no hard evidence as to which ancient civilization it did originate from. However, there are numerous accounts as to who discovered it.

Most importantly, many of us enjoy it and embrace the effects that it does to our bodies. But, what are the nutrients that can be found in a cup of joe, you ask?

What Exactly is in a Cup of Coffee?

Coffee, next to water, is the second most consumed beverage across the globe. However, are we really aware of what we are putting inside our bodies?

There have been countless studies done that are focused on the nutritional benefits of drinking coffee. On the other hand, we were also made aware of the health hazards that consuming it can give.

There are many nutritional components that make up a single cup of regular coffee. These include calories, protein, vitamin B2, potassium, manganese, magnesium, and niacin.

There can also be found trace amounts of pantothenic acid.

Together, these ingredients make up a very nutritious drink that can make you feel a temporary increase in energy levels.

How Much Caffeine is in a Cup of Coffee?

In the western world, the most popular way of making coffee is through the use of a drip coffee maker using a filter method or thru pod coffee makers.

When you prepare your cup of joe this way, then you get a very sizable dose of caffeine similar to millions of people across the globe.

Some prefer the regular, brewed coffee while others go for decaf, espresso, or even instant coffee.

How Many mg of Caffeine in Coffee is Too Much?

Now that you know how much caffeine a cup of coffee contains, you might be wondering what is a healthy amount.

Many believe that about 400 mg of caffeine is just the right amount to enjoy its benefits without the side effects. However, it still depends on the person and how caffeine affects his emotional, physical, and mental wellness.

Local coffee shops usually serve them in 16-ounce cups, which means that you get around 330 mg of caffeine out of it.

While that amount stays just under the perceived daily limit, you also have to take into consideration other things that might add to it. Things like chocolate, sports drinks, soda, tea, and pain relievers, all have caffeine in them as well.

How to Enjoy the Benefits of Caffeine While Minimizing Harm

When it comes to food and beverage consumption, too much almost always means danger. The same goes for drinking coffee, enjoy it with moderation.

According to treatheadaches.com, caffeine overdose can cause many side effects including a caffeine headache, chest pain, anxiety, stomach irritation, and insomnia.

So, be careful and enjoy your coffee only as much as your body can handle.

How to Make Pour-Over Coffee Without a Scale

How Long Do Keurigs Last on Average?